By My Persian Kitchen  •  13 years ago  •  Wellness Wednesday 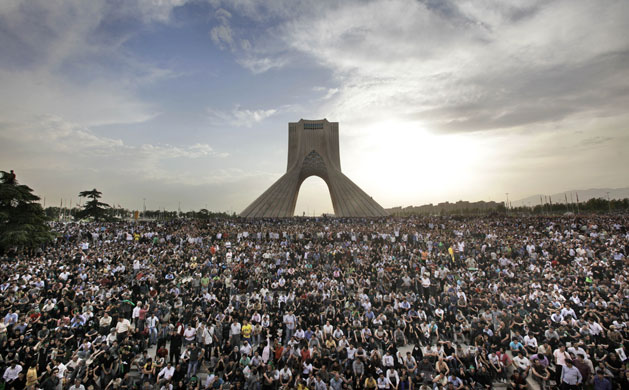 I had a completely different post in mind for this weekâ€™s Wellness Wednesday than what you are about to read. It has never been my intention in any shape, way, or form to talk about politics on this blog. My purpose for creating this blog was, and still is, to introduce Persian cuisine and culture to anyone who cares to read about it. However, today I feel the need to talk about something that has been heavily on my mind for the past few days. Forgive me for the long post, but there is a flood of emotions running through me.

Last week we flew to Seattle for our friend Winfordâ€™s graduation from University of Washington. I have known Winford for about twelve years. We met in an economics course while we were both pursuing our undergraduate degrees. I was there for his undergrad graduation and lucky me, I was able to be there for his graduate school graduation.

Friday night Winford had a party at his house and I was able to meet his new friends in Seattle. I enjoyed talking to every one of them, but one of the most memorable conversations was with one of his friends Jason.Â  I was rather surprised when he asked me if I was excited about the elections in Iran and how I felt about it. My first reaction to this question was: wow, he knows what is going on in Iran and he is not Iranian. Perhaps, I may have disappointed him when I truthfully told him that I had lost hope many moons ago about what would become of Iran. Nevertheless, I really enjoyed talking to him and learning that he has always had a fascination with Iran, follows the news about what is going on there, and that someday he would like to visit.

You see, that simple statement touches my heart in ways that I canâ€™t describe, because it is very refreshing for me to meet people who look beyond politics and see Iranians as people. What I mean by that is the fact that we are always associated with the word â€œterrorist,â€ and people that donâ€™t know better think that we are all a bunch of ignorant fundamentalists. Sadly, such people donâ€™t ever take the time to reason that the views of a government are not necessarily the views of the people of that country.

I have lived the majority of my life outside of Iran and have been treated as someone from a third world country more times than I care to admit.Â  I find this to be a huge misconception about my people because there are many highly educated Iranians around the glob.Â  Additionally, in United States we are the one minority, or immigrants, who are highly educated and successful professionals. Additionally, being religious and following your religion does not in any shape, way or form make you a fundamentalist. What makes a person a fundamentalist, or a fanatic, is when they use religion as an excuse to hurt or kill others.

I would be a liar if I said that peopleâ€™s reaction to my nationality have not bothered me. They have. Profoundly. In ways that I have resented being born in Iran and Muslim.Â  When I left Iran for the last time in the mid 80s I swore I was never going back. I planned to ask my mother to let me get baptized, and I secretly wished that I could change my last name to my step-fatherâ€™s Italian last name. I never ended up doing either, because for one thing, I have never been religious enough to want to pursue a whole different religion, and well, changing my last name was too complicated.

This resentment followed me for many years and it wasnâ€™t until I was in my mid twenties that I started feeling more comfortable with who I am, as a whole.Â  I came to realize that regardless of what happens in my life or where I live, I will always feel an emotional attachment to my birth land. I also started focusing on the good memories and attributes of being Iranian, verses the negative events that had shaped my life while I lived in Tehran.

I have always felt that I have been lucky enough to have left and given the opportunity to live in countries where I have a voice and freedom of speech.Â  Yet, at times I feel a deep sense of guilt for having had this opportunity while many others have not. In the eighties I always prayed, and let me be brave and say that I believed, that one day the fundamentalist would leave Iran because no one was happy because they made everyoneâ€™s lives miserable. By 1989, their tenth anniversary, I was left disappointed and bewildered by the fact that they had been in power for ten long years. By the time the twentieth anniversary rolled around I had lost all hope, because it had become evident to me that people in Iran had absolutely no voice and if they chose to speak they would be imprisoned, tortured, or killed, without any reservation.

This past February marked the 30th anniversary of the revolution. Thirty years of my life I have lived resenting what has become of my birth land. I have resented them for putting us through a war for eight years, brain washing people, taking Islam to a level that in my heart I firmly believe that Prophet Mohammad never intended for it to be, have killed many innocent people, and have ruined the reputation of our culture and history. And most importantly, I resent them because they punished members of my family for having worked for the previous government on both my motherâ€™s and my fatherâ€™s side. I resent them for having executed two of my auntsâ€™ husbands on my fatherâ€™s side for being high ranked in the military leaving eight of my cousins fatherless. I resent them even more for imprisoning my favorite uncle on my fatherâ€™s side for having been in the military, only releasing him for poor health nine years later. Unfortunately, he left us soon after due to leukemia leaving behind two young sons. Fortunately, on my motherâ€™s side no one died, but many were stripped of everything they worked for and humiliated.

So when I was asked what I think about the elections, these are the things that come to my mind. Ironically, I found out about the results of the elections as we were sitting on the plane waiting to take off Saturday night. I was watching CNN and they announced the results and peopleâ€™s reaction. This was yet another disappointment and slap in the face. Just when you start thinking that there might be a chance, one small opportunity, it all goes up in dust.

So today, I would like to ask you to keep all the Iranians who are fighting for their vote in Iran in your prayers. It is heartbreaking to watch what is being unfold and the violence. I feel helpless, but I am choosing to be hopeful for the Iranian youth who has shown so much courage in the past few days. Statistically, 70% of the population in Iran is young; I truly believe that they hold the future of Iran in their palms. I am cheering for them and keeping them in my prayers. Of course it is easy for me to say go on, go out there and risk your life, as I am sitting here at my desk typing this post in the safe haven of the South Bay. But there is nothing I can do. All I can do is make sure that people understand that those out in the streets protesting are trying to fight for a change and demand for their votes.Â  The footage seen all over, either on YouTube or pictures, is gruesome. But please understand that it wouldnâ€™t be this way if the government didnâ€™t exercise their violent antics. The Iranians out in the streets are crying out to the world that they want change. There has been, there is, and there will be a lot of blood shed, but I am hopeful that this time it will lead to a change for the better.

In conclusion, I would like to share a couple of sources for information about the latest news out of Iran:

One of my favorite Twitters with up-to-date info about Iran and all things Persian: Persian_Twitts

Iran Protests: Twitter, the Medium of the Movement Time.com

Last but not least, I ask you to pray for the wellness of all the protesters seeking a better Iran while leaving you with this powerful song, “Imagine, Iranian peace song. The song is in Farsi with subtitles in English within the video.